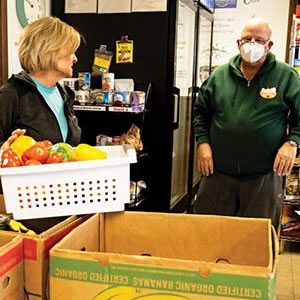 GCFP In the News 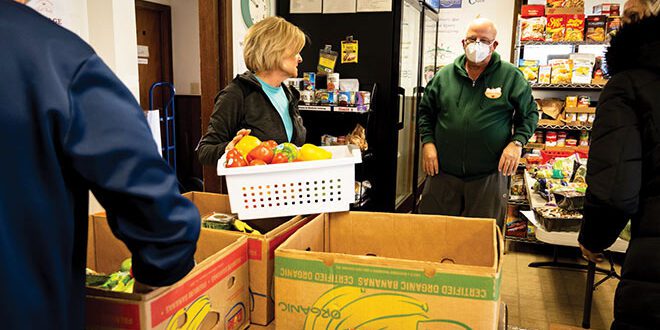 Every weekday morning, a group of dedicated volunteers can be found bustling around the Gunnison Country Food Pantry preparing to distribute food to those in need. They pack up boxes with a variety of non-perishable boxed or canned goods, fresh fruit and vegetables, bread, dairy, eggs and meat when possible. After they load their delivery vans, lately in sub-zero temperatures, they head in all directions—including the North Valley—to bring people the food they need. As volunteers drive away, the prep spaces convert back to food storage, a lobby for shopping, office areas and makeshift meeting rooms to manage the other tasks of each day.

Since opening in 2006, the food pantry has become a trusted and vital, if not entirely known part of the local ecosystem where people can show up for help to bridge a gap between seasonal work, when going through a hard time or simply looking for a way to help others. The pantry is now preparing to move into a larger space and plans to expand its ability to meet basic human needs in the Gunnison Valley.

“Everybody has to eat,” notes Katie Dix, the pantry’s vice president. A conversation with Katie starts with an acknowledgement of economic cycles and the downturns that have historically hit Gunnison County hard. Katie has been with the pantry since 2013 and served previously as both board president and executive director, so she has seen the reverberations of a recession, a pandemic and a real estate Zoom boom. She says the pantry stays focused on current demands and preparedness for when the next wave of need occurs.

“We’ve been stable as a society for 12 years now,” says Katie. “But to sit back and say, ‘well we’re fine for now,’ is not going to help us be ready to face the next challenge.”

Even in an era of relatively low unemployment in Gunnison County, food insecurity is a reality for many community members. According to the latest Gunnison County economic recovery update released last month, wages continue to increase year to year, but not in keeping with costs of living. The choice between buying groceries or paying a heating bill, for instance, means choosing between two basic needs.

“We’re not here to feed people exclusively; we’re here to help people stretch their budget so they can put gasoline in their cars if they need to go to work. Or they can pay their heating bill so they have heat in their house,” says Joe Dix, Katie’s husband who also works at the pantry.

Joe points to a chart tacked on the wall in the pantry’s office that lists income levels based on number of family members. This qualifies someone for assistance. “We have one criteria here when a person comes in and wants to sign up for some food. We don’t require any documentation,” he says. “We don’t care where they come from, whether they are legal or illegal; we give people food. Because no one in Gunnison County should go hungry.”

Joe says in his experience there has only been once or twice that someone realized they made more than the number on the chart and that maybe they didn’t need the pantry after all. Rather, he reports that visitors almost always take less than their allotment, and voice concern that they want to leave plenty for others.

The pantry served about 1,050 families last year, each family consisting of 2.2 people on average. Those seeking assistance jumped 80% during the first year of the COVID pandemic.

“People had gotten laid off. They were scared. They wanted to know where we were, what we could provide and if we were going to be nice to them,” says Katie. While those numbers leveled off, the pantry has continued to see 5% to 7% growth each year since 2018. During the COVID response, the organization opened a distribution site in Somerset that now serves 50 families in that area each month, and has begun offering food delivery five days per week in addition to open doors for shopping three days per week.

“What we realized during the pandemic was we needed to reach out to people,” says Joe. “There are segments of the community that need food, but are afraid to go out.”

The delivery program served between 20 and 25 households per day at the height of the pandemic, and still serves about a dozen per day. While that program is valued, Joe says the preference is always for those who can come in person.

“They get a broader selection of more nutritious food,” he says, when people can shop in the lobby. “And it gives a person the dignity of shopping.”

Katie says sometimes people have a hard time believing the need is really there, when the culture around them is one of self-reliance and the belief is that our county is one of plenty.

“People think that nobody needs food. And you’re not going to help your neighbors if you don’t know they need it,” she offers. “People ask, ‘what are you doing to cure poverty?’ And I tell them, we are giving people a solid breakfast so they can get up and face the day.”

The pantry has also kept 100 tons of food out of landfills.

“The food recovery is so important. And none of it is bad; there’s just too much of it,” says Katie. The pantry picks up surplus food from local businesses at both ends of the valley five days per week. This supplements the federal emergency food assistance program allotments, and the partnership keeps people fed while preventing food from being wasted.

But as the visitor numbers have grown and operations like deliveries have expanded, the 1,000-square-foot space has been squeezed more than ever.

“We need more space. We need a safer space, a more respectful space,” says Katie. The current operation is spread across five locations, but mostly concentrated right off Main Street in Gunnison in a central, but also conspicuous location and that sometimes deters people from visiting when they are struggling. Katie says it is also difficult for people to wait outside in the cold when there are others in line to shop.

That is about to change, as the pantry now prepares to purchase the Colorado Fitness building this week in Gunnison and quadruple its footprint. The building will have on-site office space and, after some renovations for ADA compliance, it will allow for food storage, preparation, a shopping area and a seating area for those waiting to shop.

“This will help us treat people with more dignity,” says Katie.

There is one current tenant whose lease the pantry intends to honor, she says, and there is also room for an additional non-profit organization to operate there.

“The vision is to offer that [additional] space to a food hub with a similar basic needs mission to benefit from a low rent, “she explains of the additional 3,000-square-foot space. “We will offer it at a greatly reduced rate to a deserving organization.”

The Pantry closed on the building on February 14, Valentine’s Day. “What a wonderful omen for love and good fortune for the endeavor!” says Dix.

Steve Secofsky, a pantry volunteer and a board member, is helping plan the move into the new 7,000-square-foot building. The pantry has been saving for this move for seven years, and there will be a major gifts fundraising effort to help fund the building and renovation. The Gunnison Congregational Church has taken a large role in helping with the project, among many others. Dix says the vast majority of support, whether monetary, time or food, also comes from everyday citizens.

“We will be the bridge between those who have plenty and those who need help,” she says of the future. “And we will be under one roof. It’s going to be a beautiful thing when it is finished.”

Anyone interested in a sneak peek at the new facility is invited to drop by between 1 and 3 p.m. on Saturday, February 19, to see the shell, look at the plans for the design and offer ideas. For more information, call (970) 641-4156 or visit gunnisoncountryfoodpantry.org.